Vegetarian Festival. I have taken part in this festival for 9 years. On the way into the festival you learn quite a bit about the history of it, about the meaning of it, about everything…. It is a very intense festival and, at times, not for the fainthearted. Next to my house there was a temple. Later that temple became the center of the Vegetarian Festival in place where i lived. Interested as I am, I started to take photos and, later on, take fully part in the festivities. Below you can read something about the vegetarian festival. If you have the time, go visit it, go see it, experience it. 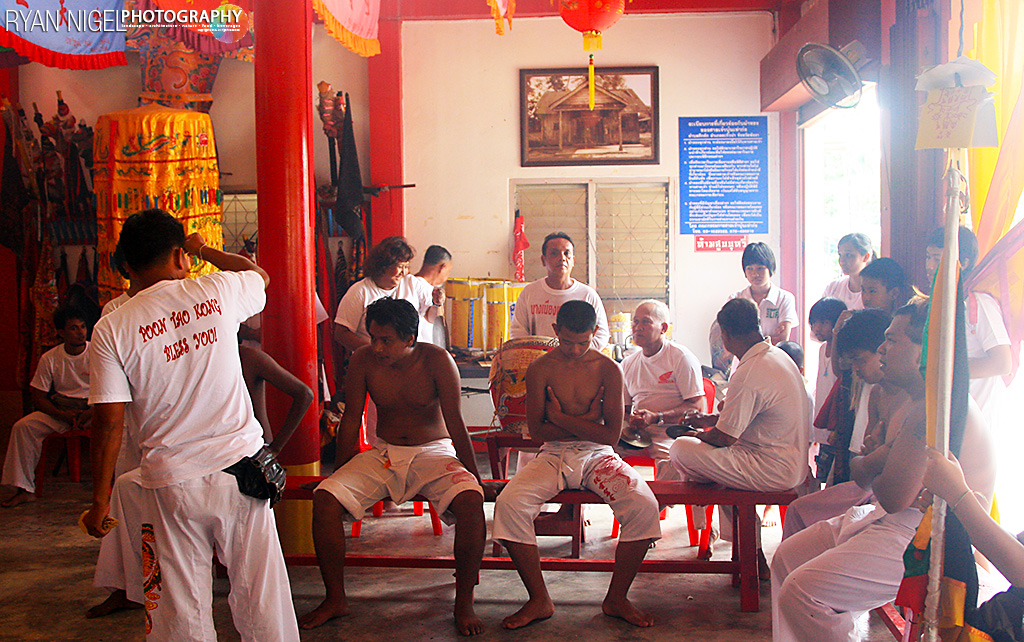 In Thailand, this festival is called thetsakan kin che (Thai: เทศกาลกินเจ), the Vegetarian Festival. It is celebrated throughout the entire country, but the festivities are at their height in Phuket, where about 35% of the population is Thai Chinese. It attracts crowds of spectators because of many of the unusual religious rituals that are performed.

In accordance with the traditions, many religious devotees will perform ritualized mutilation upon themselves and one another (with the consent of, context and understanding of all involved and the practice itself) while under a trance-like state, including but not limited to: impaling through cheeks, arms, face, legs, back etc., with everything from as small as syringes to as large as is agreed upon between all members; partial skinning (the skin is not removed, just cut and flipped over); slashing of limbs, chest, stomach and especially tongue with swords, axes and knives; bloodletting; removal of tissue (normally limited to cysts) and intentionally wrapping or standing near fire crackers as they are lit. 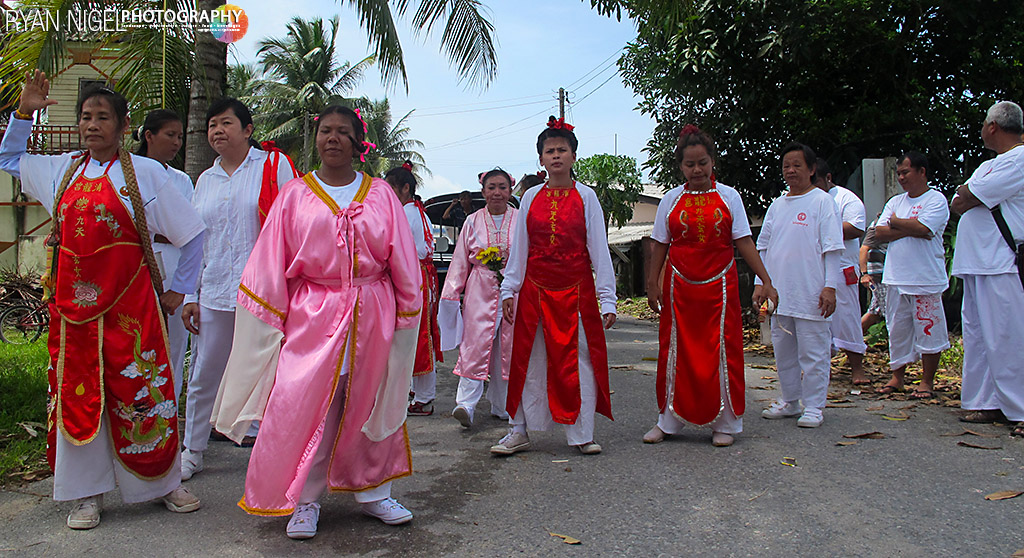 This is done without anesthetic, always inside or near the temples surrounded by other devotees with only iodine, petroleum jelly and surgical gloves as precautionary measures. Despite this scenario, many of the same people performing the rituals are also the people who will care for many of the people in their recovery. The actual impaling is done by doctors and physicians in the community, is planned out for weeks if not months in advance and medical teams are present in and around temple grounds for the entire time of the festival, with spectators frequently needing more help than the devotees, who remain in a trance during this process and are monitored through the entire event in case they should drop out of concentration, in which case they are immediately taken to medical professionals regardless of the circumstances to minimize post trance bleeding. 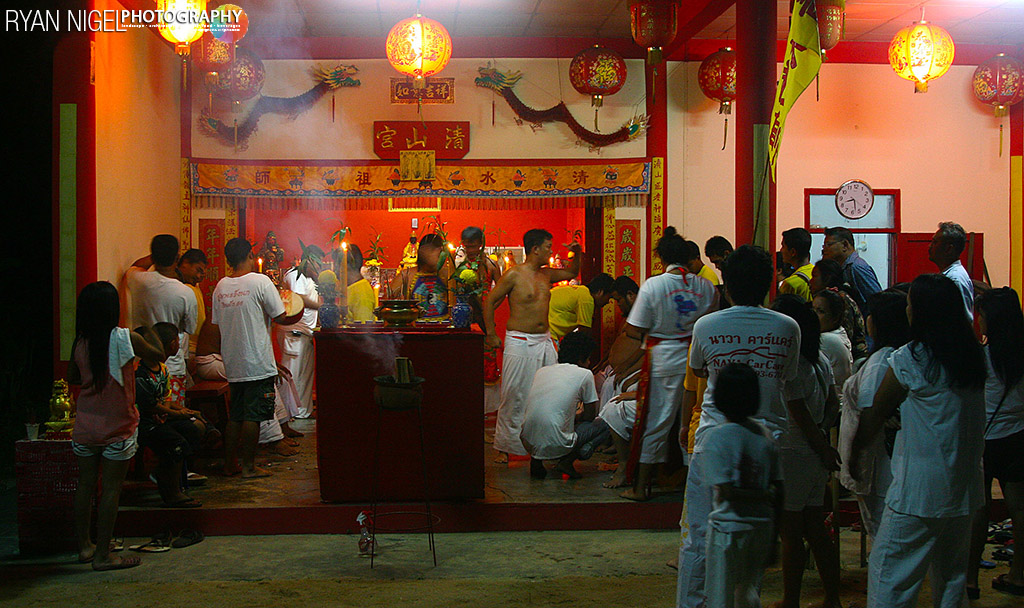 To this effect few people ever need to have prolonged medical treatment, and although in the weeks after the festival many people will be seen covered in bandages, scarring is uncommon, stitching, even on individual devotees who impale their cheeks, is rare, and return to daily activity for the devotees occurs shortly after the completion of the ritual, frequently before the festival ends unless performed on the last days, much sooner than before the bandages themselves are removed.

The purpose of this practice is a mixture of veneration for their gods and ancestors, to display their devotion to their beliefs and the trance itself, which although anecdotal in nature to what is experienced, has a profound impact upon demeanour for days or weeks after, frequently with devotees appearing exceptionally calm and focused in their day-to-day activities after the festival is completed. 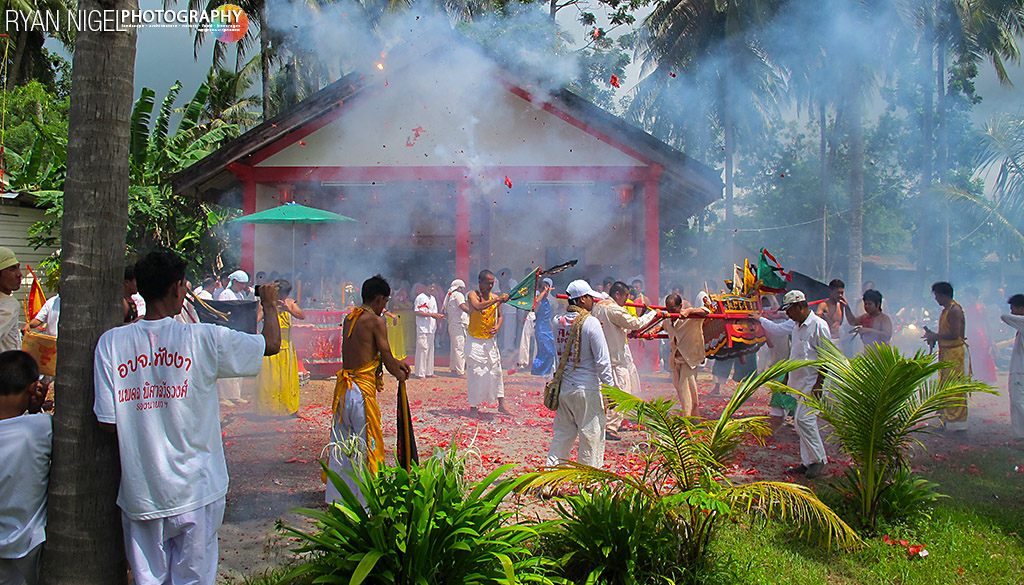 The characters เจ as often shown on stickers or flags to indicate that food is vegetarian. The characters have been stylised to be more reminiscent of Chinese writing.
During a period of nine days, those who are participating in the festival dress all in white and ghin jeh กินเจ, which has come to be translated as abstinence from eating meat, poultry, seafood, and dairy products. Vendors and proprietors of restaurants indicate that jeh food is for sale at their establishments by putting a yellow flag out with the word เจ (jeh) written on it in red. However, technically, only food prepared in the sacred kitchen of the Chinese temple (in Thailand, called sarnjao ศาลเจ้า or um อ๊ำ) is jeh, as it must undergo a series of rituals before it can be given that name.

Masong – People in trance
Masong ม้าทรง are the people who invite the spirits of gods to possess their bodies. Ma ม้า is the word for horse in Thai, and the name masong refers to how the spirits of the gods use the bodies of these people as a vehicle, as one rides a horse. Only pure, unmarried men or women without families of their own can become masong. At the temple they undergo a series of rituals to protect them for the duration of the festival, during which flagellation and self-mutilation is practiced. The masong tradition doesn’t exist in China and is believed to have been adopted from the Indian festival of Thaipusam.

The festivities in Phuket include a procession of masong wearing elaborate costumes who pierce their cheeks and tongues with all manner of things, including swords, banners, machine guns, table lamps, and flowers. While the face is the most common area pierced, some also pierce their arms with pins and fishhooks. Teams of people accompany the masong to keep their wounds clean and to help support the heavier piercings. It is believed that while they are possessed the masong will not feel any pain. They can also be seen shaking their heads back and forth continually, and usually do not seem to “see” their surroundings. At the temple during the festival there is also firewalking and blade-ladder climbing. While large crowds of people gather to watch, the entranced mah song distribute blessed candy and pieces of orange cloth with Chinese characters printed on them yang ยังต์ for good luck. (text: Wikipedia)